Immigration, Emigration and Retention (Under Development)

From wiki
Jump to: navigation, search 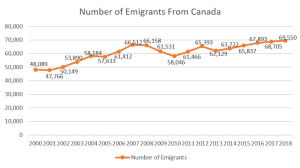 The action of leaving one place to settle in another, especially within a country.

Increased immigration is designed to tackle the issue of retention, but once permanent resident status is issued, a newcomer is free to live anywhere in Canada. And in a significant number of cases, they decide to leave. Simply increasing immigration will not solve economic and demographic issues in Atlantic Canada. The real challenge is immigrant retention. New Brunswick, Newfoundland & Labrador, Nova Scotia and Prince Edward Island are all struggling with the economic impact of an aging population and shrinking labour force. Between 2011 and 2015, Nova Scotia retained 72 per cent of its immigrants, compared to 56 per cent in Newfoundland & Labrador, 52 per cent in New Brunswick and just 18 per cent in Prince Edward Island. Every other Canadian province has a retention rate of 80 per cent or more.