A Low-Code Development Platform (or simply low-code ) is a software development environment and platform that enables modern programmers to develop application software (apps) through graphical user interfaces instead of writing code in a traditional programming language. While originally intended for applications involving databases, business processes, content/document management systems, and web interfaces, low-code is now mature enough to develop almost all types of applications except for those deeply embedded, or very high-performance (such as games or scientific computing). Low-code has its technical roots in rapid application development (RAD) and fourth generation programming languages from roughly 1992 to the early 2000’s.

is built on the concept of higher abstraction levels, where the developer can directly express business processes and requirements without getting mired in coding details. For some apps developed in low-code, a small amount of simple code is typically still written by hand – especially for applications not following one of the vast number of built-in templates. (Those requiring absolutely no handwritten code are referred to as no-code apps.) This reduction in manual coding has some important effects:

Low-code is not without its challenges:

According to the March 2019 Forrester Wave report, the current leading low-code systems (out of a total of 13 evaluated in this latest report) are Microsoft PowerApps, OutSystems, and Mendix (now acquired by Siemens), with Kony and Salesforce following closely. Similar vendor rankings are also given by Gartner, Ovum, and IDC.

Briefly, low-code is a development environment and runtime platform that allows for building apps of almost any kind (with the exception of deeply embedded or very high-performance apps) while only writing a very small amount of simple code. In many cases, absolutely no code is written – making them “no code apps.”

To the low code developer (often someone more specialized in the application domain than in coding), the low-code tool appears like most integrated development environments (IDEs). Instead of a window in which to type code, the functionality of the application is built visually. That likely starts with drawing the windows of the application, and attaching actions (again, visually) to the various GUI elements such as buttons, drop-down menus, list boxes, etc. In general, many apps support a business process, which is then drawn diagrammatically in low-code. Each step in the business process may activate other windows or take some further action.

Such actions can involve communicating with other applications (such as email), pulling in documents, consulting a database, or taking remote action. Creating an interaction with another application is usually a simple visual connection diagrammatically, and most low-code systems support APIs (which remain only visual in low-code) to a vast number of other vendors’ applications. Similarly, pulling in documents/files is done visually, along with any processing of such files – including sharing them remotely.

One of the most significant wins in low-code is database integration: the developer drags and drops a database, which is usually then autodiscovered by the low-code environment, making the structure of the database visually obvious. The developer may then visually create database queries (in a form of visual SQL), and use those results for further processing or display in a window. Naturally, various operations across databases are also supported. The leading vendors of low-code support all of the major databases across many versions. In a limited number of cases, a very complex database query must be written by hand in SQL – though that process is coached by intelligent assistants within the tool, and is done visually.

Most real-life app development involves interfacing to legacy systems – something also well enabled in low-code. Such legacy systems (e.g. SAP, some other ERP, or database) appear as connectors in a palette of supported systems, which can then be used visually, while the low-code system manages the actual API usage.

All of the low-code systems have extensive palettes of additional components – in many cases written by the low-code vendor in other languages for performance reasons. Some of the pre-built components include:

Low-code tools additionally have user communities contributing new components or wrappers for legacy systems, and proficient programmers (in other languages such as Java, C++, C#, etc.) can easily produce their own components as needed. The leading low-code vendors have extensive support for mobile and desktop apps, including keyboards, styluses, and touch-screens. Much of that support is encapsulated in a single project, meaning that a mobile version of an app can be co-developed with the desktop version.

Low-code environments directly support version control through a variety of interfaces such as to Git, Mercurial, Subversion, etc. This allows not only for the safety of being able to roll back changes, but also for multi-developer projects.

Following the assembly of the app, the low-code environment allows for immediately testing/debugging it without a long compile-build cycle. This directly supports agile development and co-refinement of requirements where domain experts/users can make adjustments to the app as early as possible. Such testing can be done in a staged testing platform with test databases, etc.

Finally, deployment is usually a single-step process in its lifecycle manager, where the low-code environment is aware of the deployment platform’s parameters and the app can be pushed directly into production and use. Should anything go wrong, rolling back to a previous version is usually equally easy.

Under the hood, low-code is of course also making use of traditional programming languages and tools – though this is not usually visible to the developer. The visual programming is translated directly into C#, Java or similar (some platforms such as OutSystems support both), which is then compiled using the normal development tool-chain. The low-code environment tracks the minimal amount of code generation and recompiles, allowing for a very interactive development experience oriented towards experimentation and prototyping. The output C# or Java can also be used standalone in case of a move away from low-code, though the actual code is often not elegant enough for true understandability.

All of the major technical industry analysts (Forrester, Gartner, Ovum, and IDC) have reported on low-code for a number of years – following Forrester naming it “low-code” in 2014. Those reports have at times identified up to fifty providers of low-code environments over the past decade. Some of those providers have faded, while three have emerged as the leading providers of very broad low-code solutions

(A broad solution is one able to interface to many other types of components (both legacy or written in other programming languages), runs on several platforms, is able to produce apps of all types.) 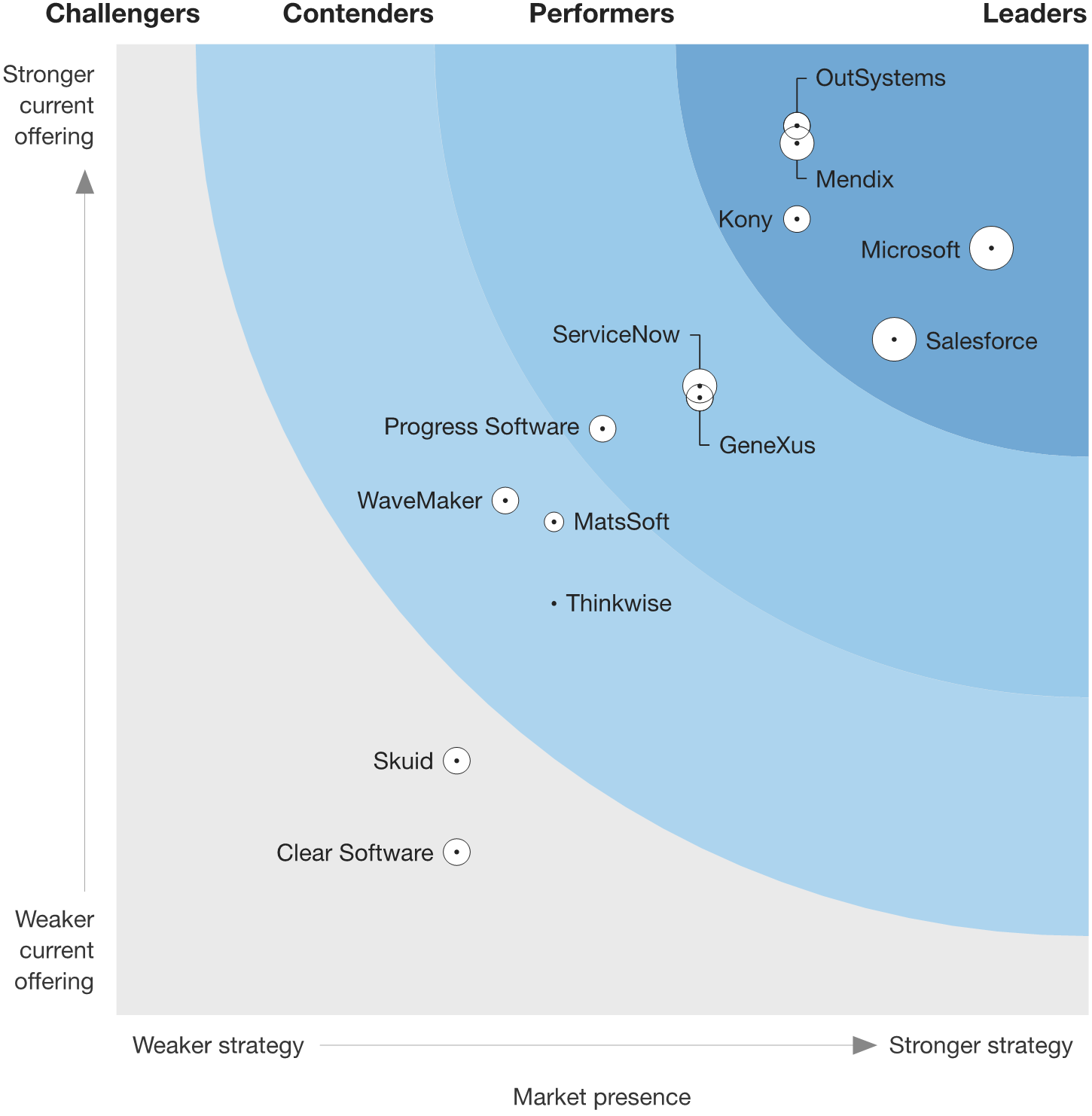 Among other requirements, the systems featured in the Forrester Wave were chosen because they each:

Websites of the low-code tool leaders typically provide reference customers, and these include numerous prominent banks, insurance companies, airlines, government departments, and the US Army – though in most cases no details are given about the precise application domain. Most of the analysts’ reports, as well as self-reporting by OutSystems and Mendix, indicate that 88% of companies are adopting low-code, while 74% of those companies are integrating the business side into low-code development, thereby directly involving the clients who dictate the requirements.

Modern low-code can literally be used in all application areas except for deeply embedded systems and very high-performance computing, though even in those two areas, low-code can provide much of an app while interfacing to software components written in other programming languages.

Given this breadth, literally all IT application areas of the Canadian Government are candidates for low-code. For example:

Analyst group IDG and OutSystems have specifically explored OutSystems for digital government, basing their evaluation on the goals shown in Figure 3, though the conclusions are valid for all low-code systems. In particular, low-code can simultaneously increase quality while decreasing service delivery costs.

It is worth noting that achieving these goals (likely via low-code) fits into the higher levels of Gartner's Digital Government Maturity Model (such as Level 4 and Level 5).

Given SSC’s heavy involvement in IT services and management, the value proposition of low-code relies on the production, deployment and maintenance of apps. Low-code moves app development to higher abstract levels (such as directly modeling business processes, etc.) and requires far less code to be written, giving the following specific value propositions:

While low-code vendors pitch it as a solution to all app projects, it is not without its challenges and issues, all of which are relevant to SSC:

In choosing whether, how, or when to move to low-code, SSC has numerous considerations. SSC would obviously gain from the low-code efficiency improvement, and the main considerations revolve around when, how, and on what scale to move to low-code. As clients become aware of SSC’s low-code plans, they will exert increasing pressure to shorten timelines/schedules as well as lower project costs. SSC will need to consider even more agility in client interactions, as well as involving them more directly in projects using low-code – all while SSC retains direct control over app development. Regardless of how fast SSC adopts low-code, there is a risk that its popularity is picked up by forward-looking (or desperate) clients that initiate Shadow IT low-code projects. Completely preventing such projects will be difficult, and SSC must consider how to bring such projects “in from the cold,” to be integrated and supported from inside SSC.

Rolling out low-code in SSC also requires some other considerations. Despite its simplicity, low-code will require at least a modest amount of developer training. This would have to be coupled with change management to integrate and not alienate traditional developers into the move; not doing so risks creating a two-tier developer corps, or having traditional developers actively working against the low-coders. SSC will need to consider a sequence of projects appropriate for low-code – whether based on risk-management/criticality or potential for savings. The security needs of SSC are somewhat unique (thanks to the broad cross section of clients), and ensuring low-code adequately supports security is a challenge needing exploration.

SSC should consider a low-code trial for several reasons: gaining exposure, evaluating low-code tools, and quantifying the ROI (at least for one project). Ideally, all of the leading low-code systems should be evaluated – though the field may be thinned (e.g. to Microsoft PowerApps or OutSystems) based on breadth of the system as well as the match to existing technologies in-use by SSC. During the trial, several aspects should be measured: training cost (which is then translated to amortized training costs as they would be across several projects), amortized licensing costs, elapsed time, client satisfaction, and amortized maintenance costs.